"... many of them turned overfull,
pouring over with inner space
into the days, which invariably

comprise themselves in abundance,
until the whole summer turns into a room,
a room inside a dream." 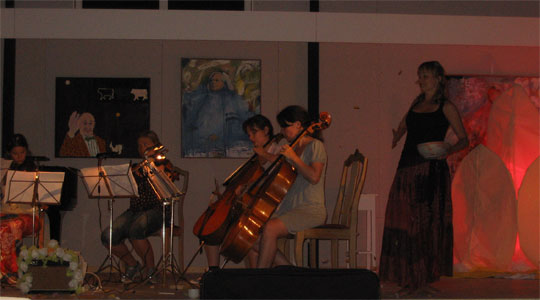 The year's Jamboree ended thus, beautiful and loving, at Kirsten Kjærs Museum on Monday 4 August - in a prolonged musical ostinato of rhythmic movement and symbolic sprinkling of petals on to the musicians on the stage. A world première by Marius Ungureanu, "Solitudes in a Room Full of Dreams", continued his formidable musicianship. A moving story about melancholic longing. The beautiful woman searching with her violin, improvising while wandering among the audience, to be followed by the sound of the string sextet on the stage. Later, broken glass and hooting women's voices added to the dream that was being created in this stirring sound world, finding her way home in her search to be submerged in the exciting musical universe of the ensemble. "Where is the outer side to such inside?"
It was a moving finish, following immediately after Tchaikovsky's "String sextet, Op. 70, Souvenir de Florence". A tremendous work, played with passion, technically brilliant, perfect in its presentation, and with playing of extreme energy and vitality from all the sextet's players. With a concentrated tutti-sound and an extraordinarily rich tone, combined with Thomas Bowes, Marius Ungureanu and not least the cellist Caroline Dale's wonderful musical dialogue. Magnificent and without compromise. The entire ensemble of high international class, playing with the whole body, and with musical drive out of the ordinary.
The music, in the hands of fullbloodied musicians in an unfinished concert hall, was brought to an audience whose enthusiasm knew no bounds.
Thanks to John Anderson and Harald Fuglsang who, in their indefatigable eagerness for art and music, have given us this fantastic opportunity so that we can continue to dream ... and live."